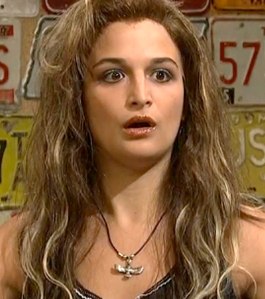 Morbid curiosity finally got the better of me, and I decided to start working through Jenny Slate’s infamous/inglorious stint on the 35th(!) season of Saturday Night Live (2009)… I already knew that she’d been fired for accidentally dropping an F-bomb live on-air, but I didn’t realise it happened in her very first episode! Ouch. In the offending sketch, she plays an aggressive “biker chick” hosting a rowdy chat show along with her Mom’s best friend (played by Kristen Wiig), in which they both use the minced-oath “frickin’” after every-other frickin’ word… until Slate slips up, and mistakenly says the offensive swear that “frick” was standing in for. The “Oh-boy!” look on her face following this slip speaks volume, though Wiig doesn’t bat an eyelid and just keeps on truckin’ with the rest of the sketch… ‘cuz she’s a professional, dammit! Shortly after that they’re joined by the episode’s host, Megan Fox, playing yet another frickin’ “Biker Chick”, but I couldn’t watch the rest of the sketch, because it was just too awkward and uncomfortable.

Considering the character that Slate was playing, and the excessive number of “fricks” she was expected to deliver over the course of the skit, I would have said that it was a clear case of entrapment… like asking someone to dance back and forth across a room full of uncooked eggs, and then getting angry when they stepped on one… except that Slate wrote the sketch herself, so it was really more of a masochistic “hoisted by her own petard”-type scenario, sadly.

Slate continued to appear in sketches across the remainder of the season, in a reduced capacity, but was not asked to return the following year… although, by her own account, she was never officially “fired”, and only found out that she’d been let go after reading about it on the internet! Having lost her dream-job,  she went into a bit of a self-loathing slump, and even had to see a hypnotist to conquer her stage-fright… but thankfully she bounced back with the support of her friends and husband to become the awesome/adorable comedy goddess we all know today! Yay her!

A comic book writer with an interest in feminism, philosophy, and affirmative action. He/him.
View all posts by Dee CrowSeer →
This entry was posted in Rants about TV and tagged Jenny Slate, Kristen Wiig, Megan Fox, Saturday Night Live, SNL. Bookmark the permalink.