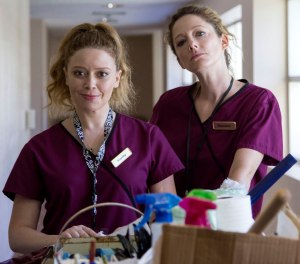 The last time I checked, Addicted to Fresno (2015) had a rating in the 30%-range on both Metacritic and Rotten Tomatoes… which seems a little harsh to me. By my reckoning, this dark indie comedy was at least 70% good/funny… though I admit that the other 30% was so frickin’ catastrophic, it would probably put me off buying the DVD for real money when it’s released.

Essentially, there are four plot threads running through the movie: First and foremost is the contentious relationship between two sisters (‘Martha’ and ‘Shannon’, played by Natasha Lyonne and Judy Greer), who are reconnecting after the elder was sent to rehab for sex addiction, and officially registered as an “offender”. As many critics have noted, it’s great to see Lyonne getting cast against type as a sweet-natured and chatty “good girl”, while Greer snarks and sneers and carelessly endangers Martha’s hard-earned “employee of the month” status at a local hotel. They both play their parts perfectly, and make for very convincing siblings, with a complicated and involving backstory… so this thread gets a hearty thumbs-up from me. 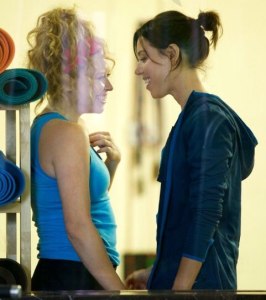 The second thread is a tentative romance between Martha and a martial arts instructor, played by Aubrey Plaza, who attempts to woo the eager student, despite the fact that Martha is still hung up on an ex (who attends the same gym), and distracted by taking care of her older sister. Again, Lyonne and Plaza have great chemistry together, and it’s refreshing to see a lesbian relationship being treated in such a down-to-earth, un-exploitative fashion on-screen… so that’s another enthusiastic thumbs-up from me! The third thread involves Shannon struggling with her addiction, while pursuing an extramarital-affair with the unscrupulous therapist (Ron Livingston) who sprang her from rehab prematurely, and edging towards a proper grown-up relationship with a pot-smoking poet (Malcolm Barrett) who also works at the hotel. Although they both have something to offer her, she’s never forced to choose between them, and they both disappear from the story before the finale, so that whole thread just sorta fades out before anything is really resolved… meaning I can only give it a half-hearted thumbs-up, followed by a disappointed sigh. 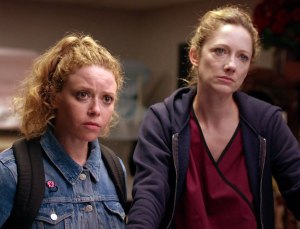 The fourth and most hackneyed/heinous plot thread involves Shannon accidentally killing a random hotel hook-up (Jon Daly!), after Martha catches them having sex in one of the rooms, and a slight brawl ensues. Shannon shoves him off-screen, and he hits his head on a bathroom counter… leaving the two sisters trying to dispose of the body themselves, rather than reporting the incident and risking serious jail-time for Shannon. They try to get him cremated at a pet cemetery by claiming he’s a Great Dane, but they’re quickly rumbled by the funeral directors (Allison Tolman and Fred Armisen), and blackmailed for hush money… which they can’t possibly pay in the time allotted without pulling off a robbery of some sort, blah, blah, blah. I chose to watch this movie solely on the strength of its cast, without reading a story summary, so I felt very disappointed when the quirky character/rom-com stuff was superseded by crime-comedy cliché… and if I hadn’t been halfway through eating my dinner at the time, I might well have turned it off there and then. I’m glad I stuck with it, because the other three threads are so enjoyable in their own right… but ultimately the manslaughter/blackmail/robbery subplot really soured the overall experience for me… not because it was in bad taste, but because it was so banal.

The wasted potential here is particularly disappointing considering the calibre of talent both in front of the camera*, and behind it: Director Jamie Babbit was responsible for the cult classic But I’m a Cheerleader, and has worked on several notable shows since then (including Wonderfalls, Ugly Betty, and Brooklyn Nine-Nine), while screenwriter Karey Dornetto has written numerous episodes for fave comedies like Portlandia, The New Normal, and Kroll Show! So, there’s certainly no doubt that they’ve got the skills and experience to produce something special… I only hope they can produce something more worthy of their résumés next time around.