I’ve now finished watching Season 35 of Saturday Night Live (2009), and have to express my disappointment at the dearth of Jenny Slate sightings. After her foul-mouthed flame-out in the premiere, she was mostly deployed as a back-up singer/dancer, and didn’t score another lead role until ep #35.9! In “Doorbells and More”, she plays ‘Tina Tina Chanuse’, the egocentric owner/spokesperson of a novelty doorbell company, who’s recorded all of the “rings” herself, in her strangely-accented/inflected voice, and can’t help mouthing along with the messages, while performing peculiar hand gestures and hip-gyrations, as if dancing to the music of her own genius. Bless. Personally, I found this sketch hilarious, and have watched it several times since… but I was already seriously hooked on Slate, so that may explain why I laughed a lot more than the live audience did at the time. The same episode also saw her playing a teen Twilight-fan, who refused to partner up with another girl during a science lesson, on the grounds that they were on opposing “teams”… the big joke being that the other girl was played by guest-host Taylor Lautner (aka ‘Jacob’ from the sparkly-vampire-movie franchise), and that his character belonged to “Team Edward”, rather than Lautner’s own fan-base. 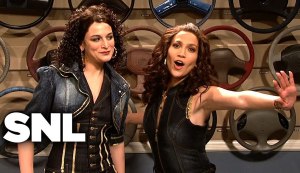 Ms. Chanuse returned two more times over the course of the season… first in ep #35.15, with a selection of novelty car horns and an assistant (her cousin) played by guest-host Jennifer Lopez, and again in ep #35.20, with a selection of novelty alarm clocks and an upstairs-neighbour played by guest-host Gabourey Sidibe! Personally, I didn’t enjoy these rehashes as much as the original, because Lopez and Sidibe pulled too much focus away from Slate, and couldn’t really duplicate her characterisation… but it was still kinda cool to see her starring in sketches with the headliners (and an Oscar nominee to boot)! I also enjoyed the Mother’s Day special (ep #35.21), which included a lengthy movie-parody (“Gingey”) co-starring Slate alongside returning SNL veterans Rachel Dratch, Tina Fey, Ana Gasteyer, and Amy Poehler, as well as beloved guest-host Betty White! That same episode also featured a fantastic three-hander between White, Gasteyer and Molly Shannon as softly-spoken, double-entendre-spewing foodies. Oh, and Maya Rudolph busting out an uproarious/erratic impersonation of Whitney Houston during the “Weekend Update” segment, of course. 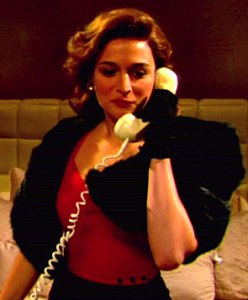 I think the high-point of Slate’s tenure acting-wise has to be her swan-song sketch from the season finale (ep #35.22), aka “Some Big Shot”, in which she played an old-timey prostitute coaxed into calling her estranged mother on the phone, by a seemingly-sappy “john” played by guest-host Alec Baldwin… the punch-line was pretty predictable, but at least she got the opportunity to show a little more range before being shuffled off into the show’s footnotes. Sniffle.

Unsurprisingly, my fave musical guest of the season was Regina Spektor (ep #35.3), who tinkled the ivories and treated us to two gorgeous songs (“Eet” and “The Calculation”, from the album Far)… while my fave guest-host, Tina Fey (ep #35.18), seemed to appear in almost every sketch that night, and really kicked the show up a notch. I especially enjoyed her “Sarah Palin Network” skit, and the weirdly-sexy/grotesque “Brownie Husband” commercial. That said, Zach Galifianakis (ep #35.16) was also very funny, with his extended opening monologue, and bidet obsession… plus a brief cameo by Jack McBrayer and Jane Krakowski, when he invaded the 30 Rock set. Hurrah!

Ah well, now I just have to catch-up on the other 40 seasons… eep!