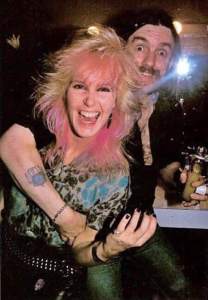 I’m woefully late to mark the passing of “Lemmy” Kilmister, founder and lead-singer of the seminal English rock band Motörhead, because I was wrestling with the supposed theme of this blog, i.e. “women I admire”… but really there’s no conflict there, because Lemmy was always proudly supportive of female musicians, and their equal right to rock/raise-hell. To quote his memoir, White Line Fever, regarding Girlschool, the all-female band who helped Motörhead score a best-selling hit single back in the 1980s (“Please Don’t Touch”): “[I] thought they were f*cking excellent. Plus I liked the idea of girls being in a band – I wanted to stick it up these pompous bastard guitarists’ asses, because Girlschool’s guitarist, Kelly Johnson, was as good as any guitarist that I’ve ever seen in my life… Not only were [they] an excellent band, they were really feisty, and didn’t give a f*ck… I like chicks who stick up for themselves.” (p.126-7)

Besides blasting out Motörhead albums at a startling rate, and touring as often as physically/financially possible, Lemmy also found time to write ear-catching tracks for Lita Ford (“Can’t Catch Me”, from Lita) and Huntress (“I Want to F*ck You to Death”, from Starbound Beast), as well as socialising with the sorely-missed folk-singer Kirsty MacColl, who he described as “a great bird… a great old friend of mine…” (p.185, 208) In the wake of his death a couple of my other fave artists posted glowing tributes on their socials, with “riot grrrls” L7 describing him as “an inspiration, an icon, and a gentleman”, and pop-icon Celeste Cruz (of Daphne & Celeste fame) remembering her first encounter with him at the 2000 Kerrang! awards: “I was 16 and out of place… Lemmy came over, spoke to me and hung out with me. I had never heard of Motörhead. I only found out later what a legend he was. He left an impression on me… First with his kindness and then with his music.” Bless. 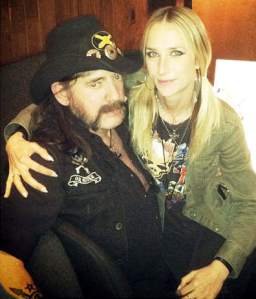 Away from the world of rock, Lemmy also represents a nexus between many of my other passions, from the Fantasy fiction of Michael Moorcock (who he met while playing with Hawkwind), to the surreal satire of Monty Python (via Michael Palin, who provided a skit for the Motörhead album Rock ‘N’ Roll (1987), which was recorded in a studio the actor owned), and the “alternative comedy” of The Comic Strip Presents troupe (having appeared in an episode of that series, as well as The Young Ones, French & Saunders, and an associated film called Eat the Rich (for which Motörhead provided several songs, including the title track))… there’s even a tenuous/contentious connection to the science-fiction comic-book 2000 AD, thanks to his cameo in the cult movie Hardware (1990), which was an unofficial/illegal “adaptation” of a short strip created by Steve MacManus and Kevin O’Neill!

So, whatever butters your bread, and whichever way you slice it, there’s no denying that the man lived his life to the fullest, and left an astounding, incomparable legacy behind him…