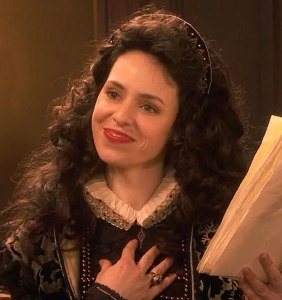 This week’s episode (#1.4) of Upstart Crow saw ‘Shakespeare’ (David Mitchell) completing the last of his 154 sonnets, and electing to present the finished pieces to his twin muses, commonly known as the “fair youth” and the “dark lady”. When it was suggested that a “sultry” woman with “dark eyes” and “thick black hair” would be appearing in later scenes, the first actress who leapt to mind was Montserrat Lombard… and lo-and-behold, she was indeed the brunette beauty of which they spoketh! Hurrah!

She was playing a fictional version of Emilia Lanier (nee Bassano), a minor noble of Venetian descent… though she was born and educated in England, so probably didn’t have quite as strong an Italian accent as Lombard was affecting here? She only had one scene, but scored several solid laughs as the supposed object-of-admiration who takes snarky offence to the “satirical” sonnet that Shakespeare has written about her (No. 130, in case you’re curious). Fun fact: Lanier was an accomplished poet in her own right, and is considered by some conspiracy theorists to be a co-author (at the very least) of several works attributed to The Bard! Crikey.