After deciding to pace myself, and wait a little while before bingeing down on the third season of Burning Love, my hungry eyes immediately fell on NTSF:SD:SUV:: (2011-2013), a “short-form” spoof of police procedural shows and action movies, which also happens to co-star the fantastically funny and talented June Diane Raphael!

Her character, ‘Piper Ferguson’, is defined as the “hottie” of this San-Diego-based counter-terrorism unit, with her tight/skimpy clothing and the bizarre (though not entirely unappealing) way she poses herself, cocking her hip and thrusting out her chest at every opportunity, as if she’s shooting a cheesecake photo-spread.* This is in stark contrast to Rebecca Romijn, playing the team’s supposedly unappealing “geek-girl” lab-tech, ‘Jessie Nichols’, whose supermodel looks are offset by a big pair of glasses and baggy clothes, in the classic She’s-All-That-stylee. The team is led by Kate Mulgrew‘s brusque (but hilariously prickly) Commander ‘Kove’, whose eye-patch mysteriously switches sides between seasons (SPOILER: In a later episode, it’s casually revealed that the patch is a pointless affectation that she randomly adopted shortly after gathering her current recruits together). Oh, and in the third season, Romijn was replaced by Karen Gillan, as self-styled “Gadget Girl” ‘Daisy’, but I can’t say I ever warmed to her very much as a character… 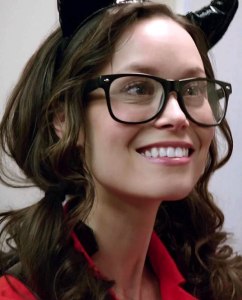 As with Childrens Hospital, the show that spawned it via a “backdoor pilot” trailer, NTSF episodes can be a little inconsistent, depending on who’s writing them, and what angle they’ve taken on the premise… but overall there were more than enough laughs and “WTF!!?” moments to make it worth a watch. If I absolutely had to pick a fave episode, I’d nominate the season three premiere “Comic Con-Air”, which sees Piper and star-agent ‘Trent Hauser’ (Paul Scheer) transporting some of fandom’s worst villains to prison via a private airplane, which has also picked-up a couple of bargain-hunting civilians. Aside from the hilarious mash-up of geek-culture stereotypes with an affectionate parody of the cult classic that inspired it, this ep also featured cameos by Natasha Lyonne as the disgruntled wife of a cheap-ass man who figured riding with convicts was a good way to save a couple bucks, Abigail Spencer as a surprisingly resilient air-steward who forms an immediate (though rather dubious) emotional bond with Trent, and Summer Glau as (to quote from the text) “a fake nerd girl, who seduces nerds with her chunky frames, then steals their collectables”. Boo! Hiss! Swoon! Oops!

Meanwhile, JDR also got some great standout episodes, such as ep #1.10, in which Piper’s previous programming as a brainwashed sleeper agent is activated and she sets about assassinating her colleagues (while speaking in a cod-Russian accent, of course)… ep #2.13, in which she repeatedly attempts to seduce the husband of a (happily?) married couple who are participating in an infomercial for NTSF’s exciting new home-security system… ep #3.8, in which she finds herself partnered with (and falling for) an old-school, unreconstructed agent who’s been brought out of retirement to help track down an unfrozen hippie villain from the 1960’s… and #3.11, the “secret origins” episode, which reveals how Piper was first recruited to the squad by an alarmingly indiscriminate Kove, back in the day.

* Recently, I rewatched the 2004 Catwoman movie, having convinced myself that I quite enjoyed it the first time I saw it. Whether that’s true or not, I found it a total chore to get through the second-time around… but it did allow me to listen to (and better appreciate) an episode of How Did This Get Made?, a podcast hosted by Scheer, JDR, and Jason Mantzoukas, in which they gleefully discuss and dissect infamous turkeys like that one. I only mention it here because they specifically mock the way the camera slobbers over the title character in her cut-up costume, and JDR seems particularly impressed with the way that Halle Berry works her body after her mystical-resurrection/feline-ification… so I can’t help wondering if that informed/inspired her performance as Piper in NTSF…?