One of the other festive treats I was looking forward to this year was the return of my second-favourite TV historian* ‘Philomena Cunk’ (Diane Morgan), with her uniquely nonsensical exploration of the origins of Christmas… which included the shocking revelation that Pagans didn’t crawl around everywhere on all-fours, old-timey people didn’t eat nearly as many peacocks as the presenter presumed, and that bread-sauce reminds her of “jizz”. Good to know! Overall, it was another hilarious barrage of brain-melting disinformation, and weirdly belligerent interviews, that helped to relieve some of the gloom that was descending on me in the wake of recent events… so bless ‘em all for that. This one-off special was accompanied by auxiliary articles in various publications, such as Cunk’s guide to Christmas food in The Guardian, and advice on how to enjoy “a budget Christmas in London” from Time Out… both of which were written by Jason Hazeley & Joel Morris, who co-write her shows with Charlie Brooker… though a recent article about Morgan states that the segments where she confounds unsuspecting experts with idiotic questions “are entirely improvised”, in case you were curious. 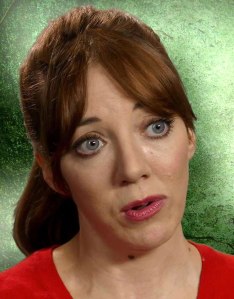 Speaking of Mr Brooker, Cunk also cropped up in his 2016 Wipe special, which took a caustic scowl back at the year’s social/cultural/political ups and (mostly) downs… though I found her “Moments of Wonder” here a little disappointing, as her interviewee (Professor Brian Cox) seemed to be in on the joke, which takes a lot of the awkwardness/fun out of it for me. Sorry.

Oh, and according to the aforementioned interview, Morgan would be well-up for making a regular series of Cunks, but reckons she’d be the last one to hear about it: “I imagine they’d speak to Charlie first. He’s the grown-up.” In the meantime, she’s been busy writing a prospective sitcom series, in which she and fellow-Boltonian/ long-time-pal Maxine Peake will play long-lost sisters. Yes, please!

* Obviously Lucy Worsley is my number one fave… but she’s a real-live person, and not a comedy character, so I probably shouldn’t be ranking them in the same category…?