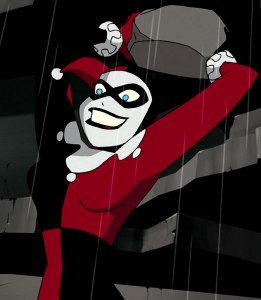 After posting my previous ramble about Harley Quinn‘s origins in the Batman Animated Universe, I was hoping I was done with these posts… but sadly my compulsive nerdy nature is driving me to continue working through the character’s various on-screen appearances, in (roughly) chronological order. Gah!

Sooo… after bowing out to a standing ovation as the lovesick heroine of her own secret origin story in the finale of The New Batman Adventures, our super-cute clown-girl next saw service as a supporting character in Batman Beyond: Return of the Joker (aka “Batman of the Future: Return of the Joker”) (2000), a straight-to-video feature-length spin-off from the Batman Beyond series. Although set in the future (2040-ish?), this story featured an extensive (and genuinely disturbing) flashback to the “present”, in which ‘The Joker’ (Mark Hamill) and ‘Harley’ (Arleen Sorkin) conspired to kidnap Batman’s latest “boy-wonder” (‘Tim Drake’, voiced by Mathew Valencia), and straight-up torture him into revealing all of his mentor’s secrets, before driving the lad insane and adopting him as their own surrogate son! Overall, this movie was a lot darker and harsher than the previous Batman cartoons (especially in the PG-13-rated “Director’s Cut”), and consequently Harley is depicted as more of a despicable/demented villainess here, rather than a wacky and loveable anti-heroine… though it was hard not to feel a slight pang of pain as she plummeted from yet another painfully high overhang, after a battle with ‘Batgirl’ (Tara Strong). 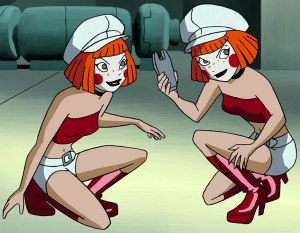 According to the DCAU Wiki trivia section for this flick, Harley was originally supposed to die as a result of her fall, but scriptwriter Paul Dini was so reluctant to kill off his hugely popular co-creation that he added a little epilogue showing her as a healthy old lady living in the future, and bailing out her adopted grand-daughters ‘Delia & Deidre Dennis’… aka the pesky “Dee Dee” twins who’d been beating-up both the shiny new Batman (‘Terry McGinnis’, voiced by Will Friedle), and his mostly-retired mentor ‘Bruce Wayne’ (Kevin Conroy), while serving as hench-wenches for the resurrected Joker. I thought this devilish duo (voiced by Melissa Joan Hart, of all people!) were a pretty awesome addition to the Quinn clan, with their sassy attitude and synchronised-ass-kicking… but since they exist a couple generations ahead of mainstream DC continuity, it’s unlikely they’ll ever be absorbed into the wider comic book universe, the way their dear old gramma was… though there’s still plenty (often quite pervy) fan-art of them out there on the internets, so clearly they have their share of admirers too!

After all that, Harley returned to her cartoon-y clown-girl roots (and the loving embrace of her lesbian-life-partner-in-crime, ‘Poison Ivy’, voiced by Diane Pershing) for an interactive web-series called Gotham Girls (2000-2002), which focussed exclusively on the fabulous female folk of that eponymous/ominous city. A total of 30 episodes were produced, but I limited myself to the ones that Harley featured in… and my faves included: Ep #1.6 (“More Than One Way”), in which she competed against Ivy and ‘Catwoman’ (Adrienne Barbeau) to steal a rare miniature painting from a local museum, using a pair of boxing-glove pistols and her disarming catchphrase “Boing-Boingy!”… ep #1.09 (“The Three Babes”), in which Ivy entertained a bored Harley by retelling the story of “Goldilocks and the Three Bears”, with themselves (and Catwoman) as the “bears”, and Batgirl as the pernickety interloper… ep #1.10 (“The Gardener’s Apprentice”), in which Harley was asked to plant-sit for an absent Ivy, and inadvertently unleashed an army of tiny green pod-people-clones of herself (!)… ep #2.18 (“Catsitter”), in which Harley tried to earn some extra cash by looking after an unruly lion cub for Catwoman… ep #2.19 (“Gotham Noir”), in which our anti-heroine played old-timey detective to track down another of the feline femme-fatale’s errant charges… and ep #2.20 (“Scout’s Dis-Honor”), in which Harley set up her own troupe of girl-scouts, in order to pass on valuable life skills and scam them out of their cookie sale profits! Frankly, the “animation” for these bite-size skits was pretty crude, especially in comparison to Batman Beyond, which featured the most visually impressive on-screen incarnation of Harley I’ve seen up to this point… but the writing and voice-acting were still top-notch, and there were plenty light-hearted laughs to be had in the first two “seasons”. 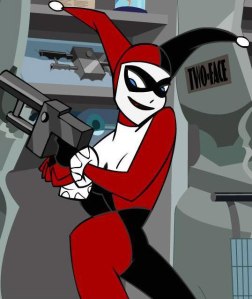 Unfortunately, the third season departed from this successful model, and featured a serialised storyline that was both totally implausible, and also vaguely offensive. To summarise: Mr. Freeze’s aggrieved sister-in-law (‘Dora Smithy’, voiced by Jennifer Hale) got her hands on a “Polarity Ray” weapon, which possessed the magickal power to zap all of the city’s menfolk into some sort of pocket-universe, where they would remain trapped and frozen-in-time, with the flick of a single switch… until some random do-gooder (in this case, Harley!) happened to discover the hidden device and flip the switch back again to return them… at which point Dora was somehow able to replace the real ‘Commissioner Gordon’ (Bob Hastings) with an exact robot duplicate that she’d created and programmed to take a harder line against costumed villains and vigilantes! WTF!? Her plan was super-convoluted, and didn’t make a lick of sense once it was revealed… but worse still, it also resulted in a scene in which the women who’d stepped in to fill their missing superiors’ shoes bickered among themselves, and snidely suggested that their opponents were totally undeserving of their impromptu promotions, implying that they could only possibly rise to such an elevated post in the total absence of any male (and therefore more worthy?) candidates… as if the idea of a female city mayor was just crazy science-fiction! Considering the sharp decline in crime (to “near zero”) that supposedly occurred after Gotham was transformed into an overnight Feminist utopia, it’s amazing there wasn’t more resistance to the re-establishment of the patriarchal status quo… though obviously it was only their city that was affected, so they would still have been swimming against the national tide, I suppose…? 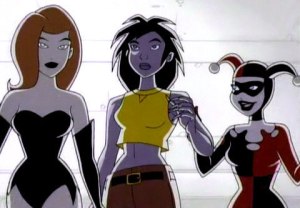 After helping to save Gotham, and every man-jack in it, Harley and Ivy quickly reverted to their previous criminal ways, cropping up as callous villains-of-the-week in an episode of something called Static Shock (ep #3.1, circa 2003). I’d never seen the show before, and had no idea who any of the central characters were… but the basic storyline dealt with a victim-of-the-week (‘Allie Langford’, voiced by T’Keyah Keymáh) who was mutating into a metallic “meta-human”, and sought out the assistance of an anonymous internet contact who claimed to have a cure for her condition. After arriving in Gotham, Allie discovered that her would-be benefactors were in fact the aforementioned miscreants, and was promptly blackmailed into aiding them with a massive gold heist… which was rudely interrupted by Batman and the show’s eponymous sparky superhero (voiced by Phil LaMarr). Again, the Harley we see here is a slightly less sympathetic version, but she still busts out some terrible puns and superfluous cartwheels to bring the fun in… and it’s kinda cool seeing her piloting her own motley-themed airship… though I assume that was impounded after her arrest…? Boo!