Our crazy-cute clown-girl got a bit of a make-over in Batman: The Brave and the Bold (ep #2.18) (2010), where she slapped on some grey-face slap, and dressed up as a monochromatic “flapper”, so she could blend in with the rest of ‘The Joker’s (Jeff Bennett) gang, who were all styled after old-timey silent comedians. Although this (at one point literal) muting might have designated her as little more than a disposable hench-wench, she actually got plenty screentime to herself, made a couple good gags, and feistily fought her corner (even landing some sucker-kicks on ‘Batman’ (Diedrich Bader) for good measure, tee-hee!). Although the overall plot was pretty outlandish, with interdimensional imp ‘Bat-Mite’ (Paul Reubens) accidentally granting god-like magickal powers to the J-Man, Harley’s arc was a classic retelling of her all-too-familiar self-negating cycle: When her boyfriend/boss is ignoring or abusing her, she realises she can do better and strives for independence… but then when he (inevitably) gets taken down by Batsy, and expresses the slightest need or fakes (?) some affection for her, she goes running back to his side, to play the nurse-maid-moll all over again. Gah! This time around, her voice was provided by Meghan Strange, who did a great job despite being silenced for a significant portion of the episode… though this was her one and only crack of the whip, sadly. 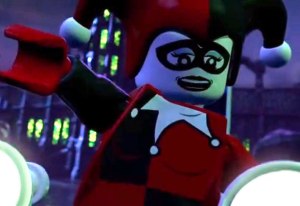 Harley made her first transition into CGI-brick-toy form* via a direct-to-video animated flick with the rather cumbersome title of Lego Batman: The Movie – DC Super Heroes Unite (2013), which was apparently based on (and featured recycled footage from) the video game Lego Batman 2: DC Super Heroes. Despite the fact that ‘The Joker’ (Christopher Corey Smith) is one of the two main antagonists (along with ‘Lex Luthor’ (Clancy Brown)) in this story, there’s no actual interaction or explicit connection between him and Harley here, as she’s just one of many villains who make a nuisance of themselves in the second act, before being cast aside and forgotten, like… well, yesterday’s toys. She’s voiced by Laura Bailey, who also plays ‘Poison Ivy’ and ‘Wonder Woman’… which would be quite an impressive achievement, if those three characters actually had more than a couple lines of dialogue each! ‘Catwoman’ (Katherine Von Till) fares a little better on the screentime and agency fronts, but still wouldn’t qualify as anything more than a very minor supporting character. Overall, it’s a very cute and enjoyable little cartoon, and I don’t regret watching a second of it… but it really came up painfully short in the lady-person department.

According to Wikipedia and IMDb, Harley’s next appearance was a so-called “cameo” in ep #2.16 (2014) of The CW’s live-action Arrow series… but all you see of her is the side of her (blurry) head, while she delivers a single line of dialogue, dubbed in by Tara Strong. Apparently they intended to bring her back for another short scene in the season finale, where you could see the rest of her head-and-shoulders… but that got cut for time, and never appeared in the actual episode. Note: The screen-cap I’m using here is from a highly misleading teaser trailer, which got fans very excited about the possibility of Harley joining the series as a recurring character… though sadly they saw more of her in that brief promo clip, than they ever did in the show itself! How’s that for false advertising? As it stands, the producers should have saved themselves the money and just put a blonde wig on a wobbly mop, rather than going to the trouble/expense of hiring an entire actress (Cassidy Alexa (née Darling)) to “play” her on-screen. Meh! 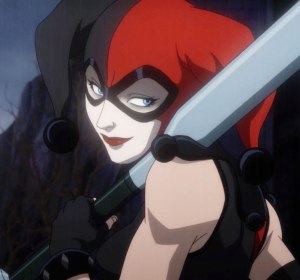 That episode also featured (and took its title from) a shoestring version of the “Suicide Squad”… which leads us rather neatly on to Batman: Assault on Arkham (2014), a direct-to-video anime-style flick about a bunch of super-powered baddies being press-ganged into service by ball-bustin’ agency director ‘Amanda Waller’ (C. C. H. Pounder), to recover vital stolen intel from an inmate at the eponymous asylum. As this release was targeted at a much older audience than most of her previous shows, Harley (Hynden Walch) is a little more psychotic and sexed-up here, cheerfully biting people’s ears off and repeatedly shedding her clothes (while artfully concealing her nipples, because apparently the powers-that-be still believe that boobs are awesome but nips are dirty and evil and wrong!), but she’s also a lot funnier than she’s been in some of her kiddy-friendly appearances, so that balances it out pretty nicely.

I’m beginning to realise that one of the drawbacks to watching so many different Batman-related shows/movies from several years apart, is that they often reboot and retell the same basic stories over again for what they assume is a new audience, which can get kinda samey if you’re stupid enough to try chugging them all down over the course of a couple weeks, for the sake of an ill-considered series of blog posts. Ack! Here again we see ‘The Joker’ (Troy Baker) become very jealous of Harley’s new-found fun-buddy ‘Floyd Lawton’/’Deadshot’ (Neal McDonough), and possessive of his so-called “property”… but then once he has her back under his spell, he quickly (and violently) casts her aside again (again). Actually, I couldn’t really see any good reason for him to suddenly spurn her the way he does here, beyond the writers suddenly remembering that it’s an established part of his M.O., and deciding to throw it in there for old times’ sake.

Frankly, the whole flick is riddled with plot-holes, and inexplicable character choices… such as the bizarre decision on the part of the morons running Arkham to keep ‘Bane’ locked-up in costume, with all his tubes attached to a large enough supply of “venom” to send him rampaging off through walls and gates, should anyone ever accidentally/intentionally press the button that activates the pumps! Doy! Still, as I say, the jokes are pretty solid, and the action scenes are exciting, and Walch did another fine job voicing Harley, and they gave her a sexy-cool costume to wear (most of the time), and it’s good to see Waller looking like a stout bulldog type again rather than a stick-thin pretty-girl (even if they did make her unnecessarily eeevil), and I was impressed by how often they killed off name-villains to underline the team’s disposability, so overall I’d have to give this one a hearty thumbs-up (as well as a spot on my ever-growing “must-buy-eventually” list).

* Unless, of course, you count an animated “fan film” called Batman: New Times (2005), which was produced by students of the Digital Animation & Visual Effects School (aka “DAVE”), based on Asylum Art’s “Minimates” line. I’m not sure exactly how official that production was, but they did manage to recruit a stellar line-up of vocal talent, including Adam West as ‘Batman’, Mark Hamill as ‘Joker’, and Courtney Thorne-Smith as a very credible ‘Catwoman’! On the downside, Harley (voiced by newcomer Chrissy Kiehl), was little more than a grenade-lobbin’ obstacle that Bats had to negotiate in his pursuit of the perfidious Joker, and her dialogue was distinctly blah… so we’ll have to call this one a “miss”, even though the short itself is quite entertaining.