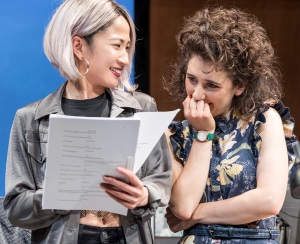 Apparently Ellie Kendrick (aka England’s Sweetheart) can currently be seen treading the boards in Gloria, a satirical office-based dramedy running at London’s Hampstead Theatre, alongside former GoT co-star Kae Alexander. This Pulitzer-Prize-nominated play depicts the frustrations of the junior editorial staff of a failing magazine, and has been garnering great reviews in the press, so here are a couple choice quotes about the highly-praised performers:

“The cast of Michael Longhurst’s production are uniformly great: Ellie Kendrick is perfect as Ani, the ‘pretty nerd’ whose sweetness is tempered with a knee-jerk faux-friendliness. Kae Alexander is appropriately appallingly as Kendra, the snarking, self-promoting rich kid…” (Time Out)

Note: I had considered travelling up to watch it as a b-day treat, but I’m still crushing hard on Kendrick, and was worried it would feel too much like stalking. The last thing the poor woman needs is some creepy old man eye-balling her from the cheap-seats while she’s trying to work! Sigh…

A comic book writer with an interest in feminism, philosophy, and affirmative action. He/him.
View all posts by Dee CrowSeer →
This entry was posted in Rants about Theatre and tagged Ellie Kendrick, Game of Thrones, Gloria, Kae Alexander. Bookmark the permalink.
Loading Comments...