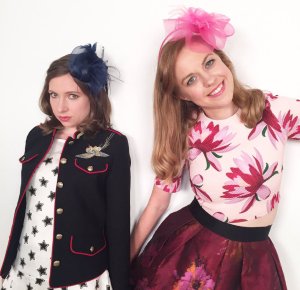 Huzzah! The Windsors returned for a well-deserved second series of satirical spoofery this week, with new characters a-plenty… including Gillian Bevan as British Prime Minister ‘Theresa May’ (Boo! Hiss!), and Kathryn Drysdale as ‘Meghan Markle’, an American actress who’s currently dating the real-life Prince Harry. Apparently Drysdale binge-watched Suits and trawled through Markle’s Instagram posts to help get into character… even though this show is an exaggerated cartoon, rather than a super-serious study. Commitment!

It was also great to see Vicki Pepperdine returning as the phantom-like ‘Princess Anne’, berating her recently downgraded nieces ‘Beatrice’ (Ellie White) and ‘Eugenie’ (Celeste Dring). The adorably sloaney sister-princesses remain my fave characters of the series (despite very strong competition from Morgana Robinson‘s swear-y, cursing ‘Pippa’), and apparently someone at Marie Claire is also a fan, as they invited the two not-really-royals to pop into the mag’s fashion cupboard to record a very funny wedding-fashion-themed vlog: “Follow their journey as they navigate the tricky world of fascinators et al”… fun!

Still no sign of a DVD of Series 1 though… sniffle…