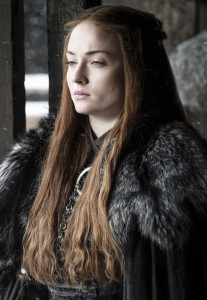 The seventh season of Game of Thrones ended as it began (sort of) with an army of ice-zombies marching inexorably south, to wage a “great war” between the living and the dead. I can’t speak to the original novels, but imho the TV series would actually be a lot better off without the “Night King” and his lumbering horde… I mean, yes, they look great, and as a horror-fan I understand the appeal of an implacable, seemingly-invincible supernatural enemy… but they’re entirely mute, and largely homogenous, lacking all of the humour, individuality, and unpredictability of the show’s best villains/anti-heroes. A couple seasons back, I realised that the longer the series went on, and the closer the Wights got to civilisation, the less time/space there’d be for the sort of political manipulation, manoeuvring, and moral-ambiguity that was the show’s stock-in-trade/unique-selling-point. And sure enough, without the literary source material to shore it up, GoT has devolved into an Epic Fantasy action series, shedding its gut-wrenching sadism in favour of crowd-pleasing spectacle. That being said, it’s still one of the best shows on television right now, and well worth the price of admission, thanks to its stacked cast, and beloved long-serving characters… 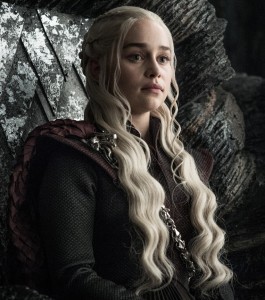 First and foremost has to be Queen ‘Daenerys’ (Emilia Clarke) who finally landed on Westerosi soil in the premiere episode, to reclaim her ancestral home (Dragonstone Island), and set about winning the hearts and minds of her erstwhile motherland. Although the “armchair general” in me couldn’t help tut-tutting at her aerial-combat tactics (Why approach the line of Lannister troops head-on and punch a shallow corridor through their ranks with dragon-fire, when you could just make a parallel approach and burn them all with a length-wise swoop… if you see what I mean?), and the wannabe-writer in me rolled his eyes at the showrunners’ reckless, logic-defying eagerness to conscript one of her precious “children” into the Wight army, it was gratifying to see Dany interacting (and forging alliances) with the other major players in the “great game”, after her long exile abroad. I’m not quite as invested in her romantic relationship with ‘Jon Snow’ (Kit Harington) as some other viewers might be, but I did appreciate the twisted humour of the two of them hooking up just as its revealed to the audience that they’re actually aunt and nephew! Hee.

Meanwhile, ‘Arya’ (Maisie Williams) probably scored the most cathartic stand-out scenes this season: She really hit the ground running in the premiere episode, wearing ‘Walder Frey’s (David Bradley) face in order to mock and annihilate his family-line… then there was her genuinely moving reunion/parting with AWOL direwolf Nymeria (ep #7.2)… and her long-awaited return to the family pile, where she hugged it out with big-sister ‘Sansa’ (Sophie Turner), and playfully sparred with ‘Brienne’ (Gwendoline Christie) (ep #7.2). Of course, things started to get kinda shaky after that, as it appeared that the Stark sisters were naively allowing the wily “Littlefinger” (Aidan Gillen) to insinuate a wedge between them… only for the tables to turn in the finale, as the siblings united to sentence and silence that silver-tongued schemer, once and for all. Hurrah! Although it’s a shame to see him leave the stage, it was a huge relief to learn that Arya and Sansa had been working a long-con together, and that ‘Bran’ (Isaac Hempstead-Wright) was using his hard-won “Greenseer” powers to actually help/protect people, rather than just creep them out! 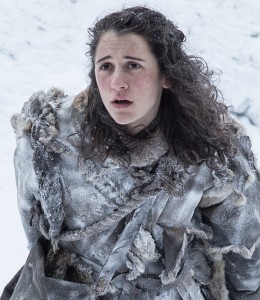 Sadly, the aforementioned Brienne seemed to spend most of the season either training or fretting, which was a bit of a let down… though I did enjoy her bonding with “The Hound” (Rory McCann) over their mutual affection for Arya, in the finale. I was very disappointed by Bran’s unceremonious dismissal of ‘Meera’ (Ellie Kendrick, aka “England’s Sweetheart”) in ep #7.4, after all the poor thing had done for him*… though at least she’s still alive (as far as we know), and theoretically available for a triumphant return in the next season… unlike the much-maligned “Sand Snakes”, who were either dispatched outright (in the case of ‘Obara’ (Keisha Castle-Hughes) and ‘Nymeria’ (Jessica Henwick) in ep #7.2) or dumped in a dungeon to rot (in the case of ‘Ellaria’ (Indira Varma) and ‘Tyene’ (Rosabell Laurenti Sellers) in ep #7.3), as the writers hastily washed their hands of the entire Dornish debacle. Feh. ‘Olenna’ (Diana Rigg) was another unfortunate casualty of the narrative downsizing, but at least she got to deliver a poisonous parting-shot before she snuffed if (also ep #7.3). I hated seeing the Ironborn amazon ‘Yara’ (Gemma Whelan) reduced to a damsel-in-distress in the service of ‘Theon’s (Alfie Allen) belated redemption arc… but hopefully she’ll be allowed to play a larger role in the battles-still-to-come, after her successful rescue (preferably in the premiere episode)…? Fingers crossed!

Oh, and (much like the writers themselves) I almost forgot about ‘Lyanna’ (Bella Ramsey), who was basically just brought back in eps #7.1-2 for a retread of her previous scene-stealing turn in a couple council meetings, before disappearing entirely. Boo! How can she become Arya’s BFF if they never even meet???

* BOOK SPOILER: I haven’t read them, but apparently Bran has a serious crush on Meera in the original novels… which I can totally sympathise with, if she’s anything like her on-screen counterpart!