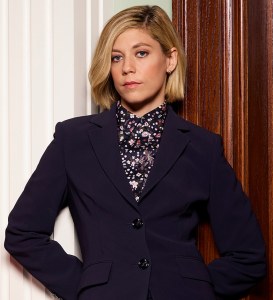 ABC’s zippy new legal drama For the People is easy to watch, but hard to invest in… possibly because it’s a little too zippy for its own good at times, rushing through several heavily abridged cases-of-the-week in every episode, and leaving little time for viewers to form any real attachment to any of the defendants, explore their own thoughts/feelings about the hot-button issues thrown up by the trials, or challenge their own pre-existing political/social/moral biases, before everything is wrapped up neatly with a verdict and immediately forgotten. Nothing sticks, and nothing carries over, beyond a little light team bonding/antagonising. That said, the dialogue is witty and sharp, delivered by a confident and winning cast (many of whom are young and relatively unknown), so I was a little disappointed when I saw the dismal ratings and reviews that it’s receiving, because I for one will miss the show if/when it’s cancelled… though that’s mostly because of my budding crush on the ensemble’s buttoned-down stand-out, Assistant US Attorney ‘Kate Littlejohn’, played by Susannah Flood.

A rival (defeated) attorney describes Kate as intense and uncompromising, with the ability to “instil in you an incalculable fear and dread”… a socially-awkward-but-insanely-brilliant legal-eagle, crushing opponents with her inestimable intellect, rigorous research, and righteous zeal for The Rule of Law. She’s exactly the sort of uncompromising “angel” you’d want on your side when you’re in-the-right, but would hate to have railing against you when you’re in-the-wrong… which you’re almost certain to be eventually, since she’s such an obsessive stickler. Still, as we learned in the most recent episode (#1.3, “18 Miles Outside of Roanoke“), Kate’s not quite as “stone-cold” as she might appear at first glance, and does experience softer human emotions… as evidenced by Flood’s masterful delivery of an increasingly-emotional (and Emmy-worthy?) 400-word monologue regarding a seminal school field-trip, that handily summarises her “secret origins” as a kick-ass prosecutor, while also breaking the legal deadlock in a sticky negotiation. 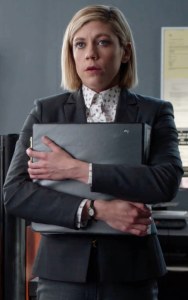 Although I enjoy the novelty of seeing the contrasting/conflicting sides of the cases these lawyers (briefly) tussle over every week, with prosecutors and defenders both inspiring a certain amount of sympathy and admiration, if the characters were separated into two competing shows to give everyone/everything more air/impact, there isn’t a scintilla of doubt which one I’d be cueing up to watch first (and third)… I’m “Team Kate”, all the way!

Note: An earlier version of this post included a poor attempt at wordplay, suggesting that she “puts the ‘cute’ in ‘prosecutor’”, but it was deleted on the grounds that it’s demeaning, and doesn’t really work in print. Bygones!

A comic book writer with an interest in feminism, philosophy, and affirmative action. He/him.
View all posts by Dee CrowSeer →
This entry was posted in Rants about TV and tagged For the People, Kate Littlejohn, Susannah Flood. Bookmark the permalink.