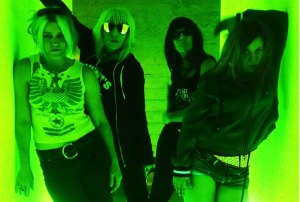 After whetting the world’s appetite with two well-received singles, the newly reunited/reinvigorated L7 are ready to go the distance and record a full-length comeback album. They’ve just launched a campaign on PledgeMusic to crowdfund the project, with plenty packages and perks to offer their supporters, from signed limited-edition vinyl to “Life’s a Bitch” beach towels!

The progress-o-meter thingy had already passed the 50%-funded mark before I got a heads-up e-mail (via the organisers of the Kickstarter campaign for their critically-acclaimed, award-nominated retrospective documentary Pretend We’re Dead), and it shot up to 75%-funded shortly after I pledged… before mysteriously dropping back down to 62%-funded for no apparent reason. Pesky! But, as the old song says, we’ve only just begun, and there’s the promise of more items (and merch) to be announced over the next couple months, so I’ve no doubt that they’ll meet their target, and I’ll be enjoying a shiny new album by my all-time-favourite-band-of-all-time in the not-too-distant future! Hurrah!

Oh, they’re also touring the world as well, if you happen to like loud sweaty rooms, and live somewhere on the planet Earth…

A comic book writer with an interest in feminism, philosophy, and affirmative action. He/him.
View all posts by Dee CrowSeer →
This entry was posted in Rants about Music and tagged L7, Pretend We're Dead, Punkiness. Bookmark the permalink.