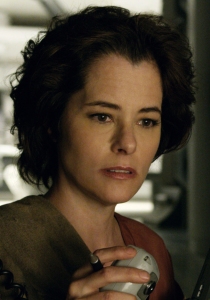 Last night I finished bingeing my way through the first season of Netflix’s Lost in Space reboot, which I wound up enjoying a lot more than I expected to from the trailer. Interestingly, this iteration of the show lives up to its title twice-over by being a (family-centric) version of ABC’s Lost set in space, with a disparate/dysfunctional group of survivors crash-landing on a mysterious alien planet, and struggling to make peace and progress in the present, as intermittent flashbacks flesh out their twisty backstories. I’m not generally a fan of derring-do adventure stories, where the main characters are constantly placed in perilous situations by their environment… especially when I know none of them are actually going to be killed off because they’re the “stars”, rather random disposable “Red Shirts”*… and “child prodigies” in sci-fi shows are a notoriously noxious bunch, so a whole family of them should be a total nightmare… but the writing and the performances here (from youngsters and oldsters alike) were entertaining and engaging enough to make me forget all of my pre-existing genre prejudices, and just settle in for the rollicking ride.

As ever, the franchise’s MVP remains the wily ‘Dr. Smith’, gender-swapped and reimagined here as a slippery identity-snatching sociopath… a role that gives idiosyncratic “indie” actress Parker Posey plenty to sink her teeth into, as she plays the innocent “victim” and concerned therapist in public, then stalks and schemes away when everyone else’s oblivious backs are turned. Boo! Hiss! Hurrah! Meanwhile, on the “goodie” side of the moral divide, Mina Sundwall steals scene after scene as ‘Penny Robinson’, the wise-cracking “slacker” of the family, who scores countless laughs as she snarks away, and occasionally/reluctantly saves the day. Bless. Not to say that Molly Parker, Toby Stephens, Taylor Russell, and Maxwell Jenkins didn’t pull their weight, bringing the estranged Robinson brood bang up to date… but their characters were all a bit too serious and straight-laced for me to get too excited about. Sorry! Oh, there was also an unexpected but much appreciated flashback cameo by Selma Blair as Smith’s more-successful “little” sister ‘Jessica’, in ep #1.3.

So far the reviews and ratings have been a bit lukewarm, but I’d love to see a second season… if only to find out if there’s any plausible in-universe explanation for why the robot can only remember three words at a time…

* That said, a couple jump-scares and cliff-hangers did give me a bit of a jolt, so they’re clearly doing something right!