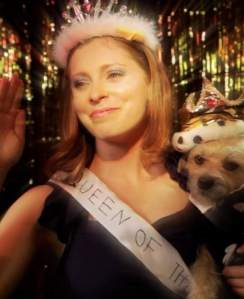 After playing (and replaying) a couple Garfunkel and Oates videos on my “smart” blu-ray player, the YouTube app thingy recommended that I check out some of (award-winning musical-comedian) Rachel Bloom’s work as well… thus infecting my brain with the insanely catchy song “I Steal Pets”, which is still on a permanent loop in my head, well over a week later! I’m hoping that if I pass on a link, and trick someone else into watching the (NSFW) video, I’ll be cured of this “curse”… like in The Ring…?

Interestingly, the video has its own IMDb page, where it’s currently rocking an approval rating of 7.7/10 (based on 35 votes), which is pretty impressive… and well-earned too, because it really is a great clip, adding plenty visual gags to an already very funny track… which is also available as an MP3, individually or as part of the album Please Love Me, released in 2013 (and currently boasting a five-star review-rating on Amazon.com!)

A comic book writer with an interest in feminism, philosophy, and affirmative action.
View all posts by Dee CrowSeer →
This entry was posted in Rants about Music and tagged Garfunkel and Oates, I Steal Pets, Please Love Me, Rachel Bloom. Bookmark the permalink.
%d bloggers like this: