“The Moon Accepts Your Ridiculous Proposal!”

The fourth season of Parks and Recreation (2011) was largely dominated by ‘Leslie’s (Amy Poehler) campaign for a seat on the city council… but while it was easy enough to follow, and be drawn in, by the emotional beats of this story arc, I’m still not super-clear on what her new powers/duties will be, or why she was so desperate to win them! Hopefully that will become clearer in the following seasons, once she actually gets her boots on the ground (as it were)? Either way, I couldn’t help seeing some parallels between her race against Sweetums-heir* ‘Bobby Newport’ (Paul Rudd) and the 2016 Presidential Election… i.e., a spoiled simpleton with no experience or understanding of political office decides to run on a whim against a more focussed and qualified (slightly nerdy?) blonde lady mired in scandal. Even her heart-swelling acceptance speech seemed to offer a prescient rebuke to the current POTUS: “The idea behind this campaign was a simple one… That with hard work and positivity, a group of people can make a difference… During my term as your city councillor, I want to focus on your hopes and not your fears. I want to solve problems instead of creating friction. And I will work hard every hour of every day to make Pawnee a better place to live because I love this city. And I know first-hand, how very special the people of this city are… Let’s break out a map. Not the old, out-of-date one that shows where we’ve been, but a crisp new one that shows where we might go. Let’s embark on a new journey together and see where it takes us.” Sniffle.** 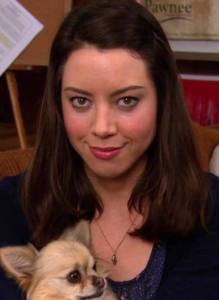 As for the main focus of my obsessive adoration, ‘April’ (Aubrey Plaza), I can’t help fantasising about what an awesome Goth she’d make… I mean, she talks and thinks and behaves like a Goth, in almost every respect except for her clothing/make-up and music choices… e.g., repping for the moon, wishing other people’s happiness would “go away”, and suggesting “warrior-witch” as her dream job. Her glee over gruesome Hallowe’en party-decoration ideas was truly a joy to behold, and if I wasn’t already besotted with her (and the actress who wears her face), the wicked smiles she kept shooting at the camera after saying something mean/macabre would totally tip my heart over the edge. While we’re on the subject, I have to pick Leslie up on her close-minded goth-shaming of ‘Orin’ (Eric Isenhower), after April invited him to a Valentine’s Day dance as a potential date for ‘Ann’ (Rashida Jones) (ep #4.14)… she refers to him as a “weird, morose mummy” when he’s standing right behind her, and then insists: “Offense intended, Orin. Let this be a wake-up call about the way you present yourself to the world!” Boo to that! 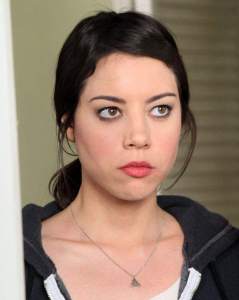 Unfortunately, April’s romance with ‘Andy’ (Chris Pratt) has become less intense/tumultuous since they became a married couple, though I did enjoy the episode (#4.6) where they tried to shake things up by working through Andy’s “bucket list”, eventually stealing away (in a stolen car!) to gaze in awe at the Grand Canyon… which does not, in fact, feature the faces of old-timey presidents (though I share Andy’s blurry sense of geography, and can totally relate to his confusion on that one). I probably should have been offended by how A+A were depicted in ep #4.12, as they idiotically attempted to exploit their health insurance by taking as many random tests (and incurring as many incidental injuries) as possible, but the prat-falls (no pun intended) were so funny, I was too busy laughing to scowl! The writers do seem to be setting April up as a potential successor to Leslie though… I noticed she was looking a little sharper (style-wise) at the start of the season, and by the end of it she was shouldering many more responsibilities, and wearing many more metaphorical hats… which is great, because I love seeing her take charge and boss people around, even if it does diminish her slacker street-cred. 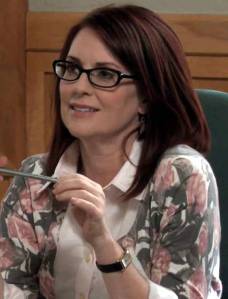 Meanwhile, there were plenty talented lady-actors making cameos throughout the season: First came the big reveal of why ‘Ron’ is (Nick Offerman) so afraid of his ex-wife, “Tammy One” (Patricia Clarkson): She’s a soulless, spirit-crushing IRS agent, intent on auditing him! Dun-dun-dun! (ep #4.1) After hiding out in his cabin-in-the-woods for most of the episode, Leslie managed to convince him to return to Pawnee to face his much-maligned nemesis, only for him to once again fall under her spell, and become a clean-shaven, pastel-coloured chucklehead. In desperation, Leslie called on Hell’s-librarian “Tammy Two” (Megan Mullally), and Ron’s hard-drinking battle-axe mother, “Tammy Zero” (Paula Pell), for help… though it was his compassion for his collateral-damage-suffering workmates that eventually gave him the kick to reclaim his core identity. Hurrah! (ep #4.2) Apparently, that show of inner-strength on Ron’s part was enough to banish “Tammy One” forever, as Clarkson never returned for an encore, but “Tammy Two” reappeared in ep #4.9 to offer testimony against Leslie at her trial for unethical conduct, only to narrowly avoid the “perjury trap” by skipping out before saying anything incriminating (for either of them). Phew! 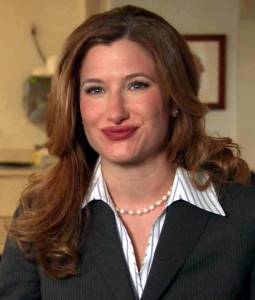 Other adversaries included (self-proclaimed) “legendary newswoman” ‘Joan Callamezzo’ (Mo Collins), who “Gotcha’d” Leslie on her book-club show with the revelation that the proud Pawneean was actually born over the border in stuffy/snobby Eagleton (ep #4.3), and also co-anchored/moderated the televised election debate, despite her long-established bias against our heroine! (#4.20) But Leslie’s most threatening foe (on multiple fronts) has to be Bobby’s cheerfully-ruthless (and disarmingly candid) campaign manager ‘Jennifer Barkley’, played by the inestimable Kathryn Hahn, who scored big laughs (and stole numerous scenes) as the unscrupulous city-slicker, whose tenacious story-spinning was motivated purely by monetary-greed… which, oddly-enough, made her way more invested in the outcome than her client was! Still, she was extremely gracious in defeat, and even offered Ben a job at her fancy Washington firm, as a reward for his work on Leslie’s campaign… which he ended up accepting, with his newly-elected-councillor/girlfriend’s support, adding another long-distance wrinkle to their relationship (ep #17/19-22).

Chelsea Peretti only had a brief blink of a cameo in ep #4.19 (playing ‘Zelda’ a snarky council suit who challenges April at a Leslie-less meeting she’s leading), but was very busy behind-the-scenes, writing two scripts (eps #4.8/19), and serving as “story editor” for the entire season… so snaps to her for that. Meanwhile, Sarah Wright appeared as ‘Jerry’s (Jim O’Heir) inexplicably attractive daughter ‘Millicent’, enjoying several inappropriate PDAs with his boss, ‘Chris’ (Rob Lowe) (eps #4.4-5/13)… Annalise Basso appeared as ‘Abigail’, the Pawnee Goddess (pseudo-girl-scout) with the “flyest hairstyle” (ep #4.4)… Natalie Morales returned as ‘Tom’s (Aziz Ansari) adorable ex, ‘Lucy’, who apparently enjoyed his end-of-the-world/going-out-of-business party enough to leave him with a heated “goodbye” kiss, while elsewhere in town, super-cute newsy ‘Shauna Malwae-Tweep’ (Alison Becker) was flirting with Ben, during his ill-considered separation from Leslie (ep #4.6)… Kelly Washington (“France”) and Jennifer Soo (“Switzerland”) appeared as high school students participating in a “Model U.N.” role-playing-game, that was ironically (?) spoiled by Leslie and Ben’s childish bickering (ep #4.7)… Danielle Bisutti appeared as ‘Professor Linda Lonegan’, teaching a college class in “Women’s Studies” that Andy signed up for (ep #4.8/18)… and finally, Leslie’s empathetic porn-alike ‘Brandi Maxxxx’ (Mara Marini) added to the fun/confusion in ep #4.20, as a competing debate candidate wearing a suspiciously similar outfit and hair-colour!

* Apparently replacing the previous “sole heir”, ‘Nick Newport Jr.’, seen in ep #2.15…!? I’m just gonna go ahead and assume that (like The Heart, She Holler) every season of this show takes place in a slightly different alternate universe…

** Fun fact: Poehler also wrote the episode that speech is taken from (#4.20), which scored her nominations for an Emmy and WGA Award.