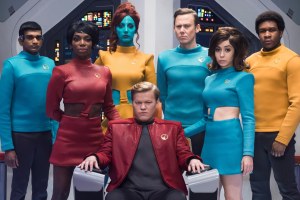 Well, the “USS Callister” episode of Black Mirror boldly went and won a handful of Emmys last week, for its Outstanding Writing (William Bridges & Charlie Brooker), Single-Camera Picture Editing (Selina Macarthur), Sound Editing, and overall Television Movie-ness. Hurrah! It lost out in a couple categories, and wasn’t even nominated in some others, so kinduva mixed bag… though this is the show’s winningest episode to date, as far as I can tell. There are still vague rumours/suggestions about a spin-off series, but nothing concrete as yet. For the record, I’d love to follow the ongoing adventures of the in-game starship crew (especially if they can figure out a way to resurrect Jimmi Simpson), but have zero interest in the “irl” investigation of blokey’s murder. Basically I want a female-fronted Farscape with swearing, please and thank-you.

Meanwhile, Game of Thrones won Outstanding Drama Series, and Supporting Actor (Peter Dinklage), as well as a sled-load of behind-the-scenes awards, but none of their female cast members got a look-in, sadly.

I didn’t watch the ceremony itself, only a couple clips on YouTube, but did want to give Ilana Glazer and Abbi Jacobson snaps for their hilarious warm-up to announcing the “Outstanding Writing for a Variety Special” award… makes a pleasant change to have presenters who know each other well being intentionally awkward for a laugh, rather than a pair of random strangers reading stilted “banter” from a teleprompter!