One of my Xmas presents this year was a DVD boxset of the first two seasons of Mr. Robot (2015/16), a dystopian drama/thriller series centred around (and narrated by) ‘Elliot’ (Rami Malek), a socially-impaired cybersecurity whizzkid (and part-time vigilante) who’s headhunted by a revolutionary hacktivist cell called “fsociety”, led by a charismatic (and slightly cult-ish) leader known only as “Mr. Robot” (Christian Slater), who hope to bring down the ubiquitous international conglomerate E Corp (aka “Evil Corp”).

I’ve tried to get into this series twice before, but never made it further than the third episode (for reasons I’ll explain in a sec), but was drawn back in by a craving for more Carly Chaikin (who plays Elliot’s fellow hacker (and potential love-interest?) ‘Darlene’), as well as all the rave reviews that the mesmerising Malek was getting for his role in the Queen-biopic Bohemian Rhapsody. It’s impossible to deny the quality of this show’s cast, or the power of their performances… and in a way, that’s partly what put me off watching it the first (and second) time around. It’s so effective at evoking a sense of disorientation, detachment, and discomfort with its desaturated palette, off-kilter framing, and lonely/desperate characters, that it literally gave me nightmares! But there’s also a lot of humour in there, and occasional patches of sunshine/warmth, and the story is a real “page-turner”… I rather stupidly spoiled a major plot-twist for myself before watching each season, but there were still more than enough shocks and surprises to keep me guessing, even when I “knew” what was “really” going on! In many ways, it’s like a modern-day Game of Thrones, with computers instead of dragons… there’s the same sense of moral ambiguity, with shifting alliances and questionable loyalties, as various powerful factions scrabble to survive, and you can never be certain who, if anyone, is going to win the upper-hand… or if any given scene is going to end with a hug or a homicide… 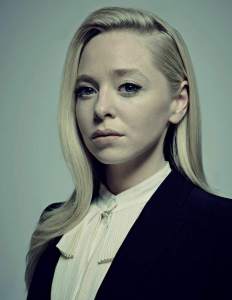 Although I’m still deeply dippy about Chaikin, and loved Darlene’s look/attitude here, my fave character would have to be Elliot’s childhood-friend/co-worker ‘Angela’ (Portia Doubleday), who remains the most sympathetic and straight-up “human” of the leads, even when her wide-eyed innocence is seemingly corrupted by corporate ambition… though I also have to give a shout-out to Sunita Mani, who plays the quiet-but-determined hijab-wearing hacker codenamed “Trenton”.

Although the show can be a teeny bit derivative at times, these “influences” are vastly outweighed by the originality and ingenuity displayed by series creator/writer/director Sam Esmail, and overall it’s an extremely moreish and satisfying experience… so I’m really itching to pick up and binge-watch the third “chapter” before the fourth-and-final season airs later this year…