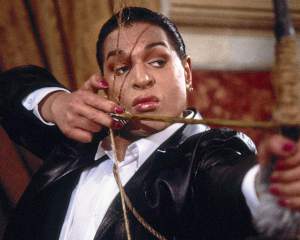 A recent satirical reference to American socialists (supposedly) wanting to “eat the rich”* inspired me to revisit the cult 80’s Brit-com of the same name, co-written and directed by Peter Richardson, of Comic Strip Presents fame. Although I didn’t appreciate this when I first saw it back in the video-rental days, it’s interesting to note how progressive this film actually was/is, with Richardson writing the lead character specifically for a “genderfluid” actor-of-colour named Lanah Pellay (aka Al Pillay)! She plays a disgruntled server at a fancy-schmancy London restaurant, who’s fired for throwing shade at the obnoxiously rich patrons, and promptly decides to kick-start a (very small) revolution with a trio of easy-going, bow-and-arrow-toting co-conspirators… who are egged-on by a high-ranking KGB mole (Ronald Allen) intent on toppling the country’s inexplicably popular and grotesquely loutish Home Secretary (Nosher Powell). 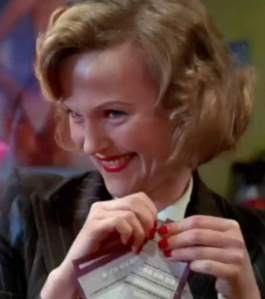 To be honest the plot isn’t particularly strong, and the jokes aren’t particularly numerous or all that funny when they do occur**… but it’s a strangely compelling mishmash all the same, and worth at least one viewing imho, if only to bask in the bizarreness… though, at present, it isn’t actually available to buy on “home video” here in the country that birthed it!

* According to Wikipedia, this is an abbreviation of a saying attributed to Jean-Jacques Rousseau: “When the people shall have nothing more to eat, they will eat the rich”.

** Comedic highlights for me were Miranda Richardson’s taunting turn as a wicked DHSS worker, Lemmy’s punch-in-the-face pratfall, and pretty much every time someone got shot with an arrow (for some sick reason)…