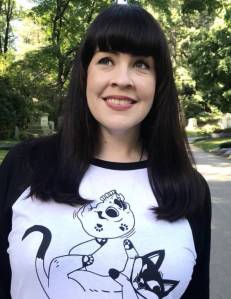 A recommendation from a friend has led to me becoming hooked on a surprisingly warm and high-spirited cadaver-centric webseries called Ask A Mortician, hosted by the insanely adorable Caitlin Doughty, who is nobly striving to reclaim the word “morbid” and promote “death positivity” in the Western world. Besides gleefully answering questions on everything from human-compost to necrophilia, and authoring several books about her travels/travails as a funeral industry “rabble-rouser” (Smoke Gets in Your Eyes, From Here to Eternity, and the forthcoming Will My Cat Eat My Eyeballs?), she’s also founded “The Order of the Good Death”, an inclusive community dedicated to encouraging the public to “stare down fears of your own death, the death of those you love, the pain of dying, the afterlife (or lack thereof), grief, corpses, bodily decomposition, or all of the above”, so that they can accept “that death itself is natural, but the death-anxiety of modern culture is not.” Right on!

Meanwhile, I’ve also developed a parallel addiction to the Instagram of the Order’s Director, Sarah Chavez, which is a treasure-trove of gorgeous goth-y imagery and inspiration. Yay!

A comic book writer with an interest in feminism, philosophy, and affirmative action.
View all posts by Dee CrowSeer →
This entry was posted in Rants about Art, Rants about Books, Rants about TV and tagged Ask A Mortician, Caitlin Doughty, Death, From Here to Eternity, Gothiness, Sarah Chavez, Smoke Gets in Your Eyes, The Order of the Good Death, Will My Cat Eat My Eyeballs?. Bookmark the permalink.
%d bloggers like this: