Not a Girl. Not A Robot. 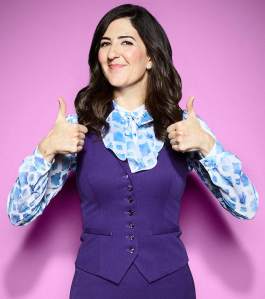 The first time I tried to watch NBC’s afterlife-set sitcom The Good Place (2016), I bailed after the pilot episode for vaguely “theological”/spiritual reasons… basically, it annoyed (offended?) me that a condescending/narcissistic socialite like ‘Tahani’ (Jameela Jamil) could supposedly get into Heaven just as she was, and that a self-confessed “trash-bag” like ‘Eleanor’ (Kristen Bell) could fluke her way in via an administrative error (i.e., two people with the same name dying at the same time). But more recently, a friend encouraged me to give the show another go, hinting enigmatically that my issues with the premise would be addressed… and how right he was! It’s eventually revealed in the S1 finale that ‘Michael’ (Ted Danson), the “architect” who designed/oversaw their neighbourhood was really a demon, who’d side-lined the four main human characters into a pocket-sized Hell-dimension as part of an experiment to see if he could torture condemned souls in more subtle psychological ways, setting them up to torment each other and/or themselves. What he didn’t count on was indecisive Ethics professor ‘Chidi’ (William Jackson Harper) actually managing to educate his fellow inmates, and bond them as a study-buddy group intent on improving themselves, thus ruining the entire experiment, and forcing Michael to (repeatedly) “reboot” their reality in a desperate attempt to achieve the results that would spare him his boss’s wrath. 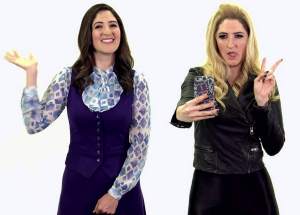 Over the course of the next two seasons, the setting and premise of the show would be exploded/twisted time and time again, with a reformed Michael now (sort of) leading the others on an epic quest to update/improve the entire “points system” that measures and sorts souls… but throughout all the mind-forking tomfoolery, the one reliable constant has been the adorability/awesomeness of ‘Janet’ (D’Arcy Carden*), an all-knowing anthropomorphised avatar designed to help the characters settle into their new “home”. As the series progressed, this artificial-intelligence program grew more and more advanced (evolving every time Michael turned her off-and-on-again), adapting to the increasingly ambitious demands placed upon her, and somehow developing into a super-strong bad-ass bodyguard (as demonstrated most spectacularly in ep #3.8, where she single-handedly wipes the floor with a bar-room full of demons!). Meanwhile, Carden has also been able to flex her metaphorical muscles as a comedic actor, playing the familiar “Good Janet” at various stages of her timeline, plus various “Bad” and “Neutral” doppelgangers (as well as Good Janet’s impersonations of them), and even the four human characters in ep #3.9, when they sought refuge inside her sub-dimensional void to escape permanent erasure, and all ended up looking/sounding exactly like their host! Here’s a fun behind-the-scenes video showing how it was achieved FX-wise, and also an interview clip of Carden explaining her prep-work.

Although I can be moved temporarily by individual scenes involving the humans (because of the talented cast, and their incredible chemistry), I find it hard to invest in any of their fluctuating relationships over the long-term, because they keep getting curtailed and over-written/reset in a way that thwarts any real continuity or sense of progression… whereas Janet and Michael have had a much more linear and consistent ongoing arc, that I find far more engaging emotionally. That said, the humans’ ongoing ethical struggles/clashes have made for very thought-provoking (and often hilarious) viewing, and I’ve greatly enjoyed bingeing the existing episodes in preparation for the shiny new fourth season**, which kicks-off next week!

* Fun fact: As a teenager, Carden added an apostrophe to her given name (originally “Darcy”) in imitation of D’arcy Wretzky of The Smashing Pumpkins! Apparently her parents were not best-pleased…

** It’s also the final season, and I’m hoping that in the end they’ll discover that everything they’ve been through was simply a standard part of the purgatorial process, to purify their souls for entry into the real “Good Place”. Fingers crossed!