My Hallowe’en got off to a rather dismal start this year, when the local “Zombie Fest” got cancelled due to crappy weather, and I was reduced to skulking around the dull, undecorated shopping centre/mall, in soggy clothes. Thankfully, that disappointment has been abated somewhat by “pumpkin spice” bagels, Jenny Nicholson’s video about her spider-review-reading hobby (!), and Bailey Meyers posting a totally on-point selfie in Wednesday Addams cosplay! Hurrah for the internets! 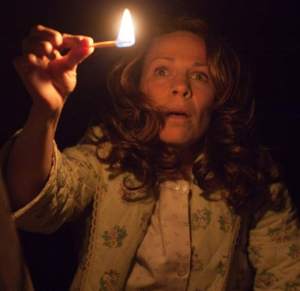 Meanwhile, I decided it was high time I got cracking on the Conjuring franchise, after a friend alerted me to the fact that I was already seven movies behind! I decided to watch them in release order, and not worry about the in-universe timeline, so that meant starting with The Conjuring (2013), which is set in 1971, and tells the “true” story of a haunted/cursed house in Rhode Island. On the plus side, there are a lot of literally chilling scenes/scares (mostly involving a childhood game called “Hide and Clap”), and a strong (mostly female) cast, including Vera Farmiga as real-life demonologist Lorraine Warren and Lili Taylor as the mother of the unfortunate family who require her (and her husband’s) urgent intervention. I also really appreciated the upbeat/uplifting resolution*, even though I’m aware the numerous sequels might retroactively undo/undermine it…? On the downside, having seen movies based on (or inspired by) the Warrens’ work before, I couldn’t help feeling a little déjà vu here… I also have a long-standing objection to writers taking “dramatic licence” with real people’s lives/deaths… but overall, I enjoyed this old-school spook-show, and will definitely be checking out the rest of the series, as time allows.