I’d fast-tracked my viewing of Trolls (2016) and Trolls Holiday (2017) in anticipation of (possibly) going to see Trolls World Tour at the cinema… but then everything got shut down, and my tentative plans were dashed. Still, Universal went ahead with an online-only release, and the movie has now broken numerous streaming records, thanks to the captive/quarantined audience. Yay?

To sum-up the (sorta) trilogy so far, they’re eye-searing psychedelic “jukebox” musicals, with super-cute/sweet-hearted central characters, and plenty wholesome messages to promote in-between all the manic action and surreal sight-gags… which had me chuckling and sniffling throughout, despite my occasional frustration with how (severely) truncated/mashed-up the chosen cover songs were.

I’ve been pretty hyped for World Tour ever since I saw the first trailer almost a year ago, which had started seriously stanning the movie’s (supposed) villain ‘Queen Barb’ (Rachel Bloom)… and I have to say she didn’t disappoint! I mean, I wish we’d spent more time with her, and deepened her character a little… it seemed like there were the seeds of some great pathos there, with her attempting to bring the neighbouring genre-themed lands under the sway of Hard Rock, in an attempt to impress (heal?) her ailing/senile father (voiced by Ozzy Osbourne, inevitably), before he lost his marbles entirely, but they didn’t really flesh that relationship out as much as I would have liked. Tbh though, even if they’d spent the entire runtime with her and the other rock-trolls, I still wouldn’t have been sated! I loved everything about their old-school Metal aesthetic, and “Fury Road”-style shenanigans… which made it all the harder to root against them as “baddies”, no matter how diabolical their ambitions were. I also find it hilarious that “Classical” music is given such short shrift, despite the “we’re all awesome/equal” acceptance promoted by the movie’s adorable heroine ‘Poppy’ (Anna Kendrick)… because, as Barb so astutely points out, orchestral instrumentals are boring as arse, and no amount of upbeat idealism can change that scientific fact! 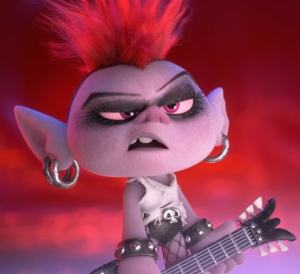 The pro reviews for World Tour have been kinda lukewarm, and I can understand that, because it does repeat some of the beats from the first two flicks, with a slightly weaker/shallower storyline… but any movie that introduces kids’ ears to songs like “Crazy Train”, “Barracuda”, and “Rock You Like a Hurricane” gets a hearty thumbs-up from me! True, they only get to hear a couple snippets in the movie itself, and the lyrics have been altered to fit the plot, but the soundtrack album boasts full-length renditions with Bloom on lead vocals, as well as the anthemic closing track “Rock ‘N’ Roll Rules” by HAIM, which can all be purchased as individual tracks! Hurrah!* I guess if you’re home-schooling your kids, you could also use it to touch off the old “melting pot vs salad bowl” debate, regarding metaphorical models for colonisation/integration…? Shame this movie wasn’t around when I was at uni…

———–
* I’m also quite partial to Kelly Clarkson’s “Born to Die” Country ballad, but recognise that may not be the best vibe to be putting out there right now…