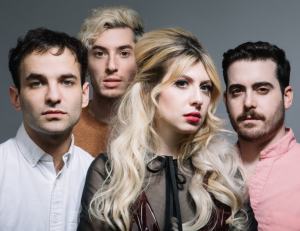 I was a little shocked/disappointed in myself a couple days ago, when I posted my previous “rant” and realised that it was the first time I’d even mentioned Charly Bliss on this blog, despite being a fan for a while now. I’m assuming that oversight occurred partly because I’m so terrible at writing about music I like, and also because I have such a huge crush on lead-singer Eva Hendricks I’m nervous about coming off as a creepy old man (too late!). All that being said, they’re a great “bubblegrunge” (!?) band, with some very emotive/inspiring material, and Eva’s* voice is pure ear-candy, so I highly recommend checking them out… and apparently it’s “Bandcamp Friday” again, so this is the perfect time to head over to their page and sample/buy some tracks!

* FTR, I’m only referring to Miss Hendricks by her first-name there because her brother Sam’s also in the band, and has the same surname, so…

A comic book writer with an interest in feminism, philosophy, and affirmative action. He/him.
View all posts by Dee CrowSeer →
This entry was posted in Rants about Music and tagged Charly Bliss, Eva Hendricks. Bookmark the permalink.