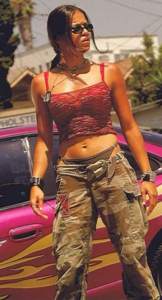 A lifetime ago I bought the first eight Fast & Furious movies on Blu-Ray, so I could gear myself up for the theatrical release of the ninth instalment, which was due to drop in May of 2020, before the whole world went to Hell. Now it appears that the movie might actually be inching its way back into the release schedules, so I’m going to dust off these blog posts I’ve had sitting in my “drafts” folder for the last couple months!

Note: Obviously I’ll mostly be talking about Michelle Rodriguez here, because I’m an obsessive fanboy… and, quite frankly, the plots/villains aren’t really all that memorable… I just like the vroom-vrooms, and the boom-booms!

First off the starting-line was The Fast and the Furious (2001), starring the late Paul Walker as ‘Brian O’Conner’, a hot-headed young cop sent to infiltrate L.A.’s illegal street-racing circuit, in order to identify and arrest a gang of highway hijackers led by imposing alpha-dude ‘Dominic Toretto’ (Vin Diesel). In a previous post I mentioned director Rob Cohen’s assertion that, in terms of screen-presence, the mighty M-Rod is worth (at least) ten men in this movie… and that definitely still stands, though I couldn’t help frowning at the way Dom literally describes her character (‘Letty’) as his “trophy” while lifting her in the air after a victory! Then again, his delivery is kinda deadpan, so we can probably chalk that up to “banter”, and excuse it as a lingering remnant of an earlier, lamer draft that was expanded and evolved to better suit/showcase M-Rod’s innate badassery? Either way, she gets a couple shining moments here, including one of the greatest introductory reveal shots in cinematic history, so there’s plenty of re-watch value for her fans. Meanwhile, Jordana Brewster doesn’t get to have nearly as much fun playing Dom’s sister (and Brian’s standard-issue love-interest) ‘Mia’, though Cohen is very complimentary about the intelligence and charm that she brings to the role, and frankly I’m still amazed that she hasn’t become a much bigger star off the back of these movies… I mean, she’s got it all, so what’s the hold-up? Gah!

2 Fast 2 Furious (2003) was a sorta-sequel, which was originally supposed to feature both of the previous movie’s male leads, but Diesel decided he’d rather make The Chronicles of Riddick instead, leaving Walker to team-up with Tyrese Gibson as a bickering (disgraced)-cop-and-criminal odd-couple going undercover to bring down a super-generic drug lord (Cole Hauser). No M-Rod in sight, and Devon Aoki’s street-racer ‘Suki’ is a very poor substitute, imho… though her hot-pink Honda S2000 is a gorgeous ride, and well worth immortalising in die-cast model form! Meanwhile, Eva Mendes has a slightly more substantial role as ‘Monica Fuentes’, a covert Customs agent working as Hauser’s aide, who also kinda serves as Brian’s half-hearted love-interest. Seeing Aoki and Mendes together here made me feel weirdly nostalgic, because those two actresses seemed to be everywhere back in the day, before their careers tailed off in the 2010s. It appears that Mendes has been on an intentional hiatus since becoming a mother, whereas Aoki was apparently tapped to play “Katana” (aka ‘Tatsu Yamashiro’) in the CW superhero series Arrow, but she departed the project before her character’s debut “due to a scheduling conflict”, and was replaced by Rila Fukushima (who went on to appear in 16 episodes over a span of 5 years, which ain’t a bad run, all things considered). For better or worse, Gibson eventually became a mainstay of the F&F franchise, while Mendes and Aoki were pretty much left behind in the dust… and the next sequel would drift (pun!) even further from the roots of the series…

Oh, but there’s a great (slightly spoiler-y for the first four movies) featurette on the F&F2 disc all about the leading ladies, titled “Fast Females” (2009). Highlights include M-Rod expressing her desire to represent the (many) “girls who aren’t scared to kick-ass… or get their hands dirty… or put their lives on the line in the name of excitement or fun”. She also praises Cohen for allowing her to build a stronger character, noting that of all the films she’s made to date, the two that everyone always brings up are Girlfight and F&F1… while he reciprocates the love by lauding her for the truth she brings to her performances. Amen. As I mentioned above, I wasn’t exactly wowed by the Suki character, but Aoki hypes her up as a “fun-loving, girl-power heroine”, so at least she’s happy with the work she did here.