Although Fast & Furious 7 (2015) boasts the “freshest” rating of the series over at Rotten Tomatoes (with 82%, compared to the original’s 53%), I wouldn’t rank it nearly so highly myself… partly because two of my fave characters (‘Han’ (Sung Kang) and ‘Gisele’ (Gal Gadot)) were killed off in the previous instalment, and partly because my least favourite character (‘Roman’ (Tyrese Gibson)) is still living large. Personally I find him intensely irritating and painfully unfunny, but apparently I’m in the minority on that one, because they keep bringing him back, and allowing scenes to grind to a halt so he can do his schtick. I vaguely recall him being a lot cooler when he was first introduced in F&F2… a button-pushing rebel, rather than a cowardly clown… but maybe my memory’s playing tricks on me? Either way, I don’t want to focus on the negative, because there was still plenty to enjoy in this instalment…

I’ve always had a soft-spot for Jason Statham, and he’s great fun here as ‘Deckard Shaw’ (the vengeful brother of F&F6’s (now comatose) villain ‘Owen Shaw’ (Luke Evans)), who keeps popping up and pursuing the heroes like he’s ‘The Nemesis’ from Resident Evil 3 (the game, not the movie). It’s funny how “God’s Eye”, the big macguffin everyone’s fighting over in this flick, is a computer program that supposedly uses digital devices to instantly locate/track a person anywhere in the world, when Shaw appears to be able to do that already using nothing but, er, The Force? Kurt Russell also has a scene-stealing cameo role as ‘Mr. Nobody’, the apparently benign “covert ops” agent who recruits the gang to recover God’s Eye and rescue its creator ‘Ramsey’ (Nathalie Emmanuel) from yet another forgettable cookie-cutter baddie. 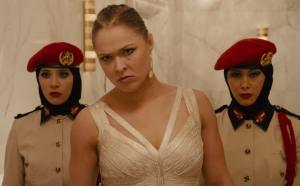 Meanwhile, ‘Letty’s amnesia gives Michelle Rodriguez some meaty acting scenes, as she struggles with the imbalance between her and ‘Dom’ (Vin Diesel), feelings-wise… she also gets to kick ass in a fancy dress, and smash up a billionaire’s schmancy apartment, so that was a highlight for me, even if it felt like a step down from her face-off with ‘Hicks’ (Gina Carano) in the previous movie, since her main opponent here is a generic bodyguard (Ronda Rousey) we’d never met before, and would never see again, rather than a recurring antagonist. I also think it’s kinda lame that only (unarmed) female guards were allowed to pursue her, because god-forbid she fight a man!

Tragically, series star Paul Walker died in an unrelated car accident mid-way through the shoot, forcing the film-makers to rewrite the script, repurpose old unused footage, and even hire his brothers, Caleb and Cody, to serve as stand-ins. Despite actively looking for “the seams”, I can’t say I noticed anything awry until the very last scene, in which Dom races against a slightly ghost-y digitally-pasted-in ‘Brian’. Personally, I think they should have left him playing on the beach with ‘Mia’ (Jordana Brewster) and their son, which seemed like a happy enough ending to me… even if it does mean consigning Brewster to the stay-at-home-off-screen-worried-wife-y role. 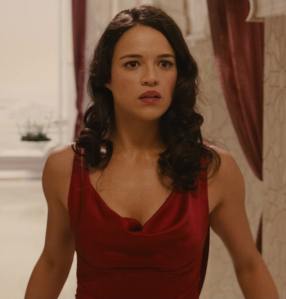 As for the extras: No commentary track, sadly, but there were a couple Letty-centric deleted scenes following her side-quest to “find herself”, including a grainy flashback co-starring the otherwise-absent Gadot! It took me a second to figure out where it was supposed to fit in the series’s continuity, until I realised it was set immediately after Letty’s explosive “death” in F&F4… which would mean that Gisele knew Letty was secretly alive the whole time she was hanging out with Dom and the gang in F&F5/6, but never bothered to tell them? Confusing! There’s also a big She’s-All-That-style walking-down-the-staircase reveal of Letty wearing her swanky red dress, with all the men drooling over her… which is a worn-out/regressive movie cliché, I know, but I’m pretty sure this is the first time M-Rod’s ever received that sort of attention on-screen! I still prefer her in “grease-monkey” mode myself, of course…

In the “Talking Fast” featurette, M-Rod notes how much the franchise has grown since the early days, muses on what a person is without their memories, and identifies the now-iconic cross-necklace as a symbol of the “unbreakable bond between [Letty and Dom]”… she also credits Diesel for his “relentless” campaign to keep her character “alive in the franchise”, with the “very special” and “beautiful” wedding scene as a “cool kicker” to their 14 years together. Bless. Away from the lovey-dovey stuff, she enviously enthuses about how much “fun” the stunt-performers must have getting shot at and blown up… an attitude echoed in a featurette about the “flying car” sequence, where she claims to be jealous of Gibson for getting to ride a big gimbal-thingy and be “tossed around like [he’s] inside a washing machine! I thought that was the coolest thing ever!” M’kay. 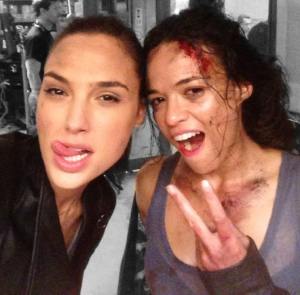 In “Back to the Start”, M-Rod reiterates how much she’s enjoyed seeing the characters “evolve” over the course of the series, and how much she values the “rapport” she’s built with the other core cast members… though she also thinks it’s cool when new people join the party, and praises Russel thus: “He’s got some swag!” Indeed.

The “Girl Fight” featurette focusses on Letty’s rumble with the gender-segregated security-squad… a sequence that M-Rod describes as “the ultimate expression of girl-power”, asserting that “even though she’s in a dress for the first time, she’s still Letty. Which means, if the situation calls for it, she’s always ready to throw down!”. Though she concedes that fighting in a gown and high-heels “was definitely the challenge part, ‘cuz you know I don’t wear them often!”, newbie director James Wan was interested in contrasting the glamour/glitz of their clothing with the brutality of the brawl, which he insists is “just as hardcore as any of the guy fights”! Meanwhile, Stunt Co-ordinator Jeff Imada praises M-Rod’s dedication, as she often powered through two intensive training sessions a day to get her moves down.

Fyi, I couldn’t help flinching every time someone mentioned “Race Wars” (the illegal desert drag-racing competition that our heroes attend in the first act), because… well, that’s not the sort of thing they should be bragging about starting irl! A featurette on the BR proudly acknowledges that the scene was straight-up fan-service, with M-Rod marvelling that the extras must be true fanatics “to be screaming in 110-degree weather, while the sun is bearing down on you, take after take, and still be showing love. I can see it in their eyes.”

Being an obsessive-completist myself, I felt compelled to buy the Tesco-exclusive DVD version solely for its bonus disc, to augment the BR version I already owned. You only get another 30-mins-or-so of extras on there, but it’s fun watching the Weta Workshop SFX crew blow up a scale model of the Torettos’ home a couple times… while also revealing that they only built the house/front-lawn itself, rather than the entire street, which explains why the surrounding buildings are completely unscathed in the finished composite shot! Oopsie! In her introductory spiel, Brewster claims that the house has come to symbolise what this franchise is about: “Family, trust, memories, hope.” So now you know.